PHEU THAI PARTY STATEMENT : A Petition to the Constitutional Court To deliberate on whether the Chief of the NCPO’s Order No. 53/2560

A Petition to the Constitutional Court To deliberate on whether the Chief of the NCPO’s Order No. 53/2560
Violates the Constitution Section 213, Appurtenant to Section 5

Reference is made to the Chief of the National Council for Peace and Order (NCPO) who, on December 22, 2017, cited the Constitution Section 265 appurtenant Section 44 of the Interim Constitution 2014 in issuing the Order 53/2560 on Political Party Law.

Members of Pheu Thai Party see that said order has several questionable points that go against the constitution and breach the freedom and rights of political parties and their members.  As such, the Party is exercising its rights, according to Section 213 in compliance with the constitutional requirement on Methods for Examination and Adjudication, B.E. 2550 and amended in the year B.E. 2560 (second amendment), clause 17 (12) and clause 21, and submits to the Constitutional Court to examine and adjudicate the important issues that oppose the Constitution and violate the rights and freedom, as follows:

The First Issue, the order by the NCPO chief no. 53/2560 is not in line with the conditions given in Section 44 of the Interim Constitution 2014.  Therefore, it is neither absolute nor lawful for the Constitutional Court give its consideration as

(1)   The main points of the order no. 53/2560 issued by the NCPO chief relates to the amendment of the organic law on political parties.  Sections 131 and 132 of the Constitution stipulate that such amendments rest within the power of the parliament (or the present National Legislative Assembly) and that such law had passed through the correct channels under the Constitution.  It had been approved by the NLA and the Constitutional Court and had been signed by the King to promulgate it as law.  Therefore,  the order to amend this law by the NCPO chief tantamount  to an override of the law under the constitution.

(2)  Thailand is a civil state, or, a state that is ruled by law and not by individuals. The law is absolute and adheres to the principle of divisible legislative sovereignty.  It administers and arbitrates other organizations and guarantees to protect the rights and freedom of individuals.  The NCPO chief is merely a person who was given the authority by the Constitution, therefore, it is not within his authority to oppose it or act beyond it.

The Second Issue, the NCPO chief’s order no. 53/2560 opposes the constitution, as follows:

(3)   By ordering that members who wish to remain within their parties shall have to submit their written confirmation to their party heads as well as present proof of their qualification and proof that they are not persons with undesirable traits within 30 days, while having to apply for verification from 14 different departments, is deemed as adding on burden or setting unreasonable criteria on the rights and freedom of the individuals.  This opposes Section 26, first paragraph, and opposes the equality clause stated in Section 27, first paragraph, of the Constitution as new members who wish to join the political parties do not have to go through this procedure.

(4)    The order did not specify the reasons or the necessities in setting the above limitations on the rights and freedom of party members, therefore, it also goes against Section 26, first paragraph, of the Constitution.

Moreover, the NCPO chief’s order no. 53/2560 breaches the political rights of political parties, for which Pheu Thai Party shall submit a petition to the Constitutional Court and to the Ombudsman for further action.

For the kind information. 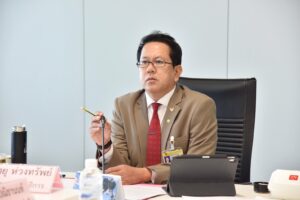 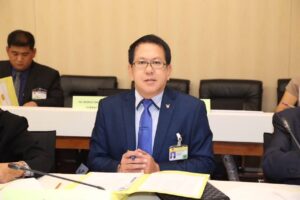 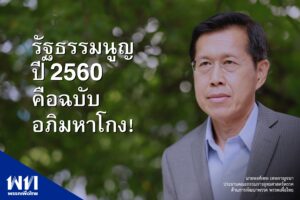