Recommendations for a Concrete and Stable Reconciliation Process

Subject:  Recommendations
for a Concrete and Stable Reconciliation Process

Reference is made
to Pheu Thai Party’s Principles and Guidelines for the Reconciliation which was
submitted to the Sub-committee on March 8, 2017.

On 8th March, Pheu Thai Party sent our
representatives to share our views and give recommendations to the
sub-committee, chaired by you.  The main
points of the recommendations stated that the reconciliation process should be
for the benefit of the Thai people, therefore,
the “independent committee” that would be set up should have
members that come from all sectors, are
trusted and accepted by the people and are not under the influence of the NCPO,
the government or any other organizations.
The independent committee must be neutral, impartial and must strictly
follow the rule of law.  Moreover, there
must be an open channel for the academics, the media, public sector
organizations and those affected by the conflicts to freely share their
opinions.  These views and opinions should then be taken
seriously and not merely for the sake of having this activity as part of the
reconciliation process. There should be no discrimination as well.  The result of how the reconciliation process
is to be conducted should be agreed by all parties  and should be based on the values of human
dignity, fairness for all,  democratic
principles, universal rule of law, and not through suppression by power – all
of which had been stated in the said document.

Pheu Thai Party understands the
significance of the above recommendations as the reconciliation process is not
just about letting go of the past and focusing on preventing future
conflicts.  In order to end the conflicts,
past and present, one must get to the root cause, be able to identify the
conflicting parties and those who were affected by them.  This will lead to a fair compensation process
which further leads to satisfied parties who will then be able to forgive-and-forget
and live in harmony even though there may be differences of opinions under a
fair system that is acceptable by all.
For it to be successful, the process must be done with independence,
impartiality and without bias.  The Party
had recommended that an “independent committee” be established to
oversee this as we think that it is a reasonable suggestion that will end the
conflict and create a concrete and sustainable unity.  However, having seen the committees and
sub-committees that are now in place, including the Committee for National
Administration under the Framework of National Reform, Strategy and
Reconciliation; the Reconciliation
Preparation Committee; the sub-committee
which is responsible for gathering opinions and suggestions on how unity could
be achieved and the sub-committee that prepares the recommendation for the
reconciliation process, it can be seen
that the majority of these members are political and government officials who
are under the influence of the leader of the NCPO and Prime Minister.  It will be very difficult for them to proceed
independently and maintain their neutrality in order to achieve the
reconciliation.

In order to achieve the desired
objective for the reconciliation, Pheu Thai Party sees that the following steps
are needed:

1.   The
government should establish an “independent committee” whose members
come from all sectors.  The members
should be neutral and fair and are accepted by the society.  They will look for facts and root causes of
the problems and find ways to solve them and suggest  compensations for them.  They will also draw up the reconciliation
process, using the information that will
be sent up by the sub-committee which is responsible for gathering opinions and
suggestions on how unity could be achieved.
They should then annul the reconciliation preparation committee;  the sub-committee that integrates the recommendations
for  the reconciliation and the
subcommittee that prepares the recommendation for the reconciliation process –
as these are not independent and neutral bodies.

2.    The Independent Committee shall complete its
work within a set time-frame and shall then present its recommendations to the
public as well as to the Committee for National Administration under the
Framework of National Reform, Strategy and Reconciliation and the
government.  There shall be no material
changes made to the recommendations drawn up by the Independent Committee.

3.  The
independent committee’s recommendations shall be put into practice and shall
involve all related parties, such as, the legislative, administrative and the
judiciary as well as people from all walks of life.

4.    During the independent committee’s working,
the NCPO and the government shall create an open and democratic atmosphere by
giving opportunities for academics, journalists, the public and those who were
affected by the conflicts to be able to share their views and opinions freely
and without any forms of harassment.  All orders issued by the NCPO or its leader
that constricts the rights of the people shall also be lifted.

Pheu Thai Party sincerely hopes that,
in your capacity as the Chairman of the Unity and Reconciliation Sub-committee,
you will take our recommendations up to the right government authorities for
their consideration, so that the reconciliation process will be successful and
will be accepted by the people and by the conflicting parties.

For your kind consideration. 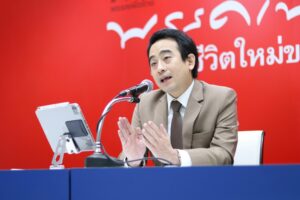